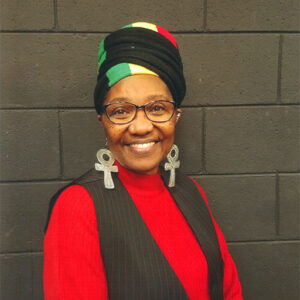 Judith Simon-Butler joined the Augusta Mini Theatre Arts and Life Skills School in its infancy in 1975 and has since received statewide recognition as a director, poet, actress, and drama coach. Known for her devotion to blurring lines between the theater and the streets, Mrs. Butler has shared her artistry at
inner-city summer camp programs, churches, community centers, behind prison walls, and on the traditional stage.

Simon-Butler shines not only as a performing artist and poet but also as a local dream maker. During her forty-six years with the Augusta Mini Theatre, this performing powerhouse has guided five young people toward national television and film careers and has inspired hundreds more to improve their lives through creative expression.
She demonstrates her commitment to lifelong learning by participating in workshops to hone her craft and by teaching students at every stage of life, from childhood through retirement.

Ms. Butler, who holds a B.A. in Drama and Speech from Augusta College (now Augusta University), has received The Terri in the category of Best Actress, a Women of Excellence in the Arts award, Greater Augusta Arts Council’s award for Artist of the Year 2000, Sister’s Only Club Shero Award “The Arts”, The Y and Kiss Family Reunion Arts and Entertainment Advocate Award to name a few.

As a leading actress with a deep commitment to reaching young people, Ms. Butler performed “The Johnny Williams Story” a one-woman show, on an extensive tour of Georgia’s youth prisons (YDC).

Judith Simon Butler is the Artistic Director and Drama Instructor at the Theatre.

Mrs. Butler is ever committed to bridging the gap between the real and the imagined.

We use cookies on our website to give you the most relevant experience by remembering your preferences and repeat visits. By clicking “Accept All”, you consent to the use of ALL the cookies. However, you may visit "Cookie Settings" to provide a controlled consent.
Cookie SettingsAccept All
Manage consent

This website uses cookies to improve your experience while you navigate through the website. Out of these, the cookies that are categorized as necessary are stored on your browser as they are essential for the working of basic functionalities of the website. We also use third-party cookies that help us analyze and understand how you use this website. These cookies will be stored in your browser only with your consent. You also have the option to opt-out of these cookies. But opting out of some of these cookies may affect your browsing experience.
Necessary Always Enabled
Necessary cookies are absolutely essential for the website to function properly. This category only includes cookies that ensures basic functionalities and security features of the website. These cookies do not store any personal information.
Non-necessary
Any cookies that may not be particularly necessary for the website to function and is used specifically to collect user personal data via analytics, ads, other embedded contents are termed as non-necessary cookies. It is mandatory to procure user consent prior to running these cookies on your website.
SAVE & ACCEPT